What are the large endemic birds of Tanzania? 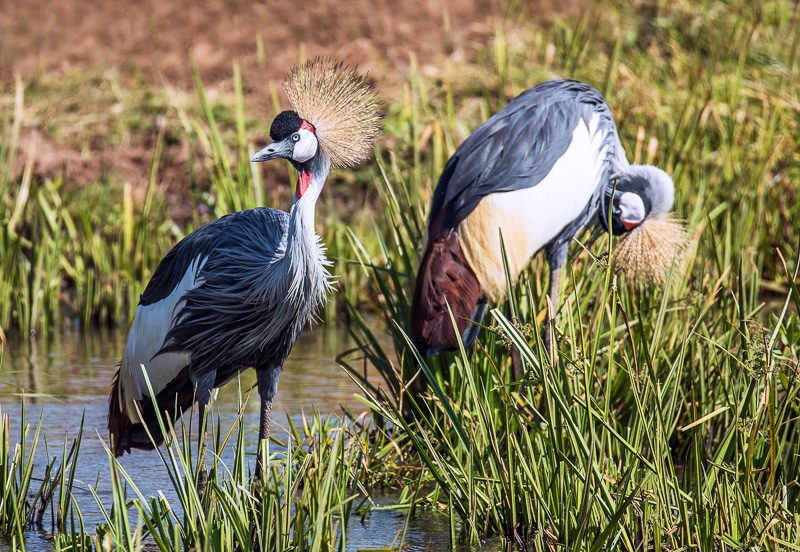 Can you identify the large endemic birds that make Tanzania their home? We are helping you out by putting together a list. Why not see how many you know?

These large birds hatch from a soccer ball-sized egg. The male of this endemic species is black and white, and the female a scruffy grey-brown colour. Ostriches can run up to 70 km/h, covering up to 5 m in a single stride.

This 1,5 m tall raptor is seen in the grasslands and is mostly terrestrial. It is thought its name derives from the European trend that secretaries had of tucking a quill pen behind their ear.

This is one of the most striking birds that looks like a black turkey, with white underwings, red wattled throat and eyes, and long, fluttering eyelashes. They also have a walk that resembles a waddle.

This endemic helmeted bird is quite common and is known for its panicky behaviour and call. It is a white speckled grey bird with a blue head and ivory casque.

This is the world’s heaviest flying bird and makes the grassland its habitat. It has brown wings with a speckled belly, prominent backward crest and a laborious gait.

There are two endemic species of francolin in Tanzania. The grey breasted francolin of the Serengeti and the Udzungwa forest partridge. They are usually seen hunting for food on the ground or at the base of trees and low down in the shrubs.

The larder billed great white pelican is a large bird that is white with black underwings and a large yellow throat pouch. This is used for catching prey and draining water from the scooped-up contents before swallowing.

The algae sifting flamingoes are one of East Africa’s most popular birding attractions. There are an estimated 5 – 6 million present here. They eat shrimps, algae, crustaceans and the pigments in their food (called carotenoids) are responsible for the red and pink colours of their feathers.

Although most species are water dependant, the black-backed heron often looks for food in the grasslands and the cattle egret flocks around buffalo herds to catch insects.

Tanzania has 8 stork species of which three are migrant, notably the familiar Eurasian variety. These birds are unable to sing.

This bird has grey feathering capped by a bristly gold crown and a red neck wattle. They frequent marsh and rank grasslands. Unlike other cranes, they usually roost in trees.

This is Africa’s second-largest raptor. It has black feathering offset by the yellow beak and legs with a distinctive white ‘V’ on its back.  It measures 75 to 96 cm (30 to 38 in) long from the bill to the tip of the tail, making it the sixth-longest eagle in the world.

One of the most distinctive African sounds is the piercing cry of a Fish Eagle. This fish feeding bird has a chestnut belly and yellow beak with black and white plumage.

This heavyset black eagle is both a hunter and a scavenger. It preys on birds and reptiles and can fly for as much as eight hours at a time searching for live food or carrion.

The augur buzzard is a fairly large African bird of prey. With the exception of the tail, the rest of the body is slate-grey with white specks and an orange tail.

These scavengers form the very important role of nature’s garbage cleaners. Due to them feasting on rotten meat, vultures have strong immune systems so they don’t get sick. Their heads and necks are almost bare of feathers so they can stay clean while feasting on a carcass.

The black kite is a medium-sized bird of prey and is Tanzania’s most common raptor. It is a bold scavenger and is regularly seen in urban areas. These birds prey on lizards, small mammals and insects, especially grasshoppers. Both live and dead (carrion) prey is eaten.

Tanzania has 15 species of Owls, which range from a thrush sized African Scops Owl to the huge Verreaux’s Eagle Owl. The local population believe that these birds are the harbinger of death.

These birds inhabit a multitude of areas, from desert to jungle, and are recognised for their heavy decurved (and sometimes colourful) bills.

If you want to find out more about what birding tours we offer, take a look at our birding tours for 2020 in Tanzania, or email us on tours@tanzaniabirding.com.

The Twitchers Guide to Vocabulary 101
6 Things you can do to attract birds to your Garden
Share this: