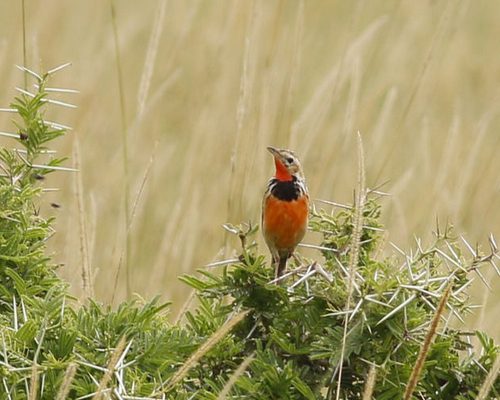 October 20: The tour will begin in the evening, when the group will meet up at the lodge after various different flights. O/N Korona Villa.

October 21: We will take a local flight to Lake Victoria in Mwanza. Meet crew and drive to Spekebay.

October 23:Drive into the Serengeti,birding the Western Corridor and driving onto the Central Serengeti and on North West to Katikati Tented Camp.

October 24: All day will be spent in the Serengeti, exploring the plains and Kopjes, where we hope to spot the Two Endemic Fischer’s lovebird and Grey Breasted spurfowl . O/N KatikatiTented Camp.

October 25: After an early breakfast, we will depart for Ngorongoro Crater, justly famous for its large concentrations of game, and we will have plenty of time to explore the area. O/N Ngorongoro near the Ngorongoro Highlands

October 26: We will walk the Ngorongoro Highlands birding for the Highland specialities of the area and on for over night at Lake Manyara.

October 28: Morning on the plains around Lake Manyara and on to Tarangire National Park. Birding & Big Game viewing.

October 30: Drive into Arusha,visiting the lark plains and over night at Arusha.Night at Korona Villa

October 31: After an early breakfast, we will drive to South Pare Mountains,birding for dry country species in the area. Over night.

November 01: After some local birding in the area, we will set off for the West Usambaras, stopping at Hedaru along the way, where a few restricted species ca sometimes be found. In the afternoon, we will explore some of the forest areas for the many rare and endemic species present. O/N Mullers Mountain Lodge.

November 03: We will have an early breakfast, and explore further the forests in the local area. Then we will depart after lunch for the East Usambaras, where we will experience the switchbacks up to this old colonial settlement before arriving at Amani Rest House.

November 04: All day will be spent in the forests and plantations around Amani, seeking out the endemics and rarities which occur here. O/N Amani Rest House.

November 06: After some local birding in Amani,we will drive to the local airport at Tanga for our Flight to Dar es Salaam.