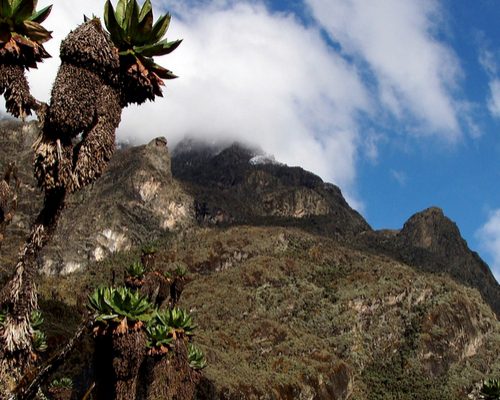 Day 1: Pick up and transfer to Kasese the foothills of the Rwenzori Mountains.We will stop at the equator crossing enroute for a photograph one feet in the South and one feet in Northern Hemisphere.We will then head to Mbarara for Lunc an the Lake View Hotel before finally driving to the foothills of the mountains of the Moon. We will Check in at the Margarita Hotel for dinner and overnight.The rest of the day shall be spent acclimatising to the climate.

Day 2: Morning, transfer to Nyakalengija on to Ibanda and start your
5-6 hour Climb into the Mountains. You will climb through the thick vegetation arriving at the Nyabitaba Hut(2650metres) in the late evening for dinner and overnight.

Day 3: Breakfast Early, then start a morning hike through the Kurt
Sharfer Bridge to marvel at the Mobuku River Confluence. A Climb through the Open Patches and Lobelia and the Heath Moss Forest before proceeding up to the John Matte Hut for overnight.

Day 4: Depart early through the Giant Lobelias and the Heath trees.
You ascend to the Bigo Bog and Scenic Landscape of Lobelias, Giant
Groundsels. Dinner and overnight at Bujuku Hut (3977) Hut.

Day 5: Leave the Valley in the Beautiful Vegetation consisting of
Giant Groundsels and Lobelia and head on an ascent to Mount Victoria
Emanue l(Mount Speke 4890)

Day 6: Depart through the lovely views of the Savoia and Elena
Glaciers. Scale further to through the Scott Elliot Pass(4372m) and proceed through the Snow to the Elena Hut for Overnight.

Day 7: Final Ascent to the Alps of Africa. Early morning ascend to
through the Snowy Alexander Peak (5092m) and the Highest Peak (5109m).

Thereafter, descend to the beautiful Lake Kitandara for overnight at the
Kitandara hut.(3900)

Day 9: Descend to Nyabitaba and proceed to Ibanda and check in at the
Margarita Hotel for Overnight.

Day 10: Break fast at leisure and transfer back to Kampala / Entebbe.

WHAT TO BRING WITH YOU FOR THE MOUNTAIN:

ABOUT THE RWENZORI MOUNTAINS.

The 120km Rwenzori chain is regarded to be the legendary snow-capped Mountains of the Moon, described by Ptolemy in AD150. Reaching an elevation of 5,109m, it is also Africa’s third mountain after Kilimanjaro and Mt Kenya,this mountain range, exceeded in altitude only by the free-standing Mount Kenya and Kilimanjaro.

The distinctive glacial peaks are visible for miles around, but the slopes above 1,600m are the preserve of hikers, who rate the Rwenzoris to be the most challenging of all African mountains.

A variety of large mammals inhabits the lower slopes, but the Rwenzoris are notable more for their majestic scenery and varied vegetation. The trails lead through rainforest rattling with monkeys and birds, then tall bamboo forest, before emerging on the high-altitude moorland zone, a landscape of bizarre giant lobelias, towered over by black rock and white snow, looking for all the world like the set of a science fiction film.

VEGETATION
The Rwenzori are well known for their unusual flora which includes many species endemic to the Albertine Rift in the higher altitude zones. Of the 278 woody plant taxa found in the afro-alpine zone, 81% are endemic to east Africa and 19% are found only in the afro-alpine belt (Herberg, 1961; Lush, 1993). Most stunning are the giant heathers, ground-sells, ericas and lobelias of the tree heath and alpine zones (Butynski, 1992). Vegetation depends largely on altitude, with five zones being distinguishable. Below 2,400m, the vegetation is broken montane forest consisting of species such as Symphonia globulifera, Prunus africana, Albizia spp. and Dombeya spp. Few large trees occur and the canopy is consequently broken except in valley-bottoms and ridge tops where the gradient is slight. The montane forest zone merges into a bamboo forest zone (Arundinaria alpina), which occurs in pure stands in many places up to an altitude of 3,000m. Up to 3,800m, the bamboo zone is replaced on poorer soils by a tree heath vegetation consisting of dense thickets of giant heathers, Philippia trimera and Protea kingaensis, frequently over 10m in height. On better soils the vegetation is characterised by a tangled undergrowth punctuated by a mixture of small trees including Rapanea rhododendroides, Hypericum lanceolatum, H. keniense and Hagenia abyssinica. Upwards to 4,400m, is a zone of Afro-alpine moorland (Howard, 1991). As a result of most botanical effort having been directed to the high altitude flora, only 75 tree species (18% of the country’s total) have so far been recorded in the montane fores
t zone; many more are expected from this zone. Two trees are found only in the Rwenzori (Hypericum bequaertii and Schefflera polysciadia), and seven others occur only here and in the other montane forest zones of south-west Uganda, namely Senecio erici-rosenii, S. adnivalis, Erica kingaensis, Philippia johnstonii, Vernonia adolfi-friderici, Ficalhoa laurifolia and the nationally threatened Ocetea usambarensis (V) (Howard, 1991).

FAUNA
Knowledge of the fauna is skewed in favour of the higher altitude species. Overall, the mountains contain at least 89 species of forest bird (27% of the country’s total), 4 species of diurnal primate, and 15 species of butterfly (22% of the country’s total) (Howard, 1991). Although none of these species are unique to the Rwenzori, many are endemic to the Albertine Rift region (for instance 19 of the birds are Albertine Rift endemics), and a high level of sub-specific endemism occurs, including the Rwenzori colobus monkey, hyrax and leopard. A recent study of invertebrate life forms listed 60 species in the alpine zone, 25 of which were new to science (Salt, 1987). This is indicative of a much more extensive fauna waiting to be discovered. Although in low numbers, the following globally threatened speciesare found in the park: elephant Loxodonta africana (V), chimpanzee Pan troglodytes (V), l’hoests monkey Cercopithecus l’hoesti.

CONSERVATION VALUE
The Rwenzori mountains, which are known internationally as ‘The Mountains of the Moon’, are a site of world-renowned aesthetic and scientific value, the most permanent sources of the River Nile, and one of the country’s (and indeed region’s)most vital water catchments on which greater than 500,000 people directly depend. Due to their immense altitudinal range, the mountains support an outstanding range of species, many of which are endemic to the Albertine Rift region, especially in the higher altitude zones. Also present are at least three globally threatened mammals, plus a potentially large number of undocumented invertebrates and plants. Because the park constitutes a small but significant element of one of the most extensive conservation zones in Africa (the transnational system of protected areas in the Albertine Rift region) conservation of the Rwenzori offers a unique opportunity to maintain a sensitive and extensive natural habitat intact (Howard, 1991).