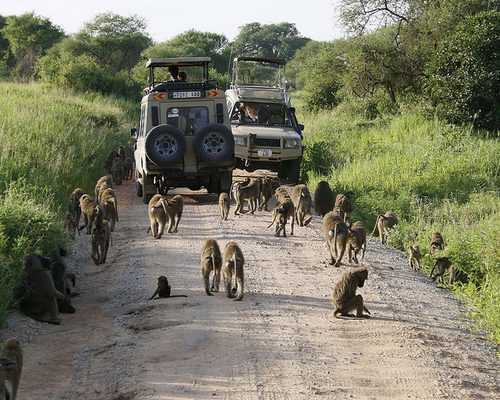 This special Tour is fully guided by our Top local bird guide.

Itinerary at a glance:

Day 1: Arrive Arusha from various flights. Meet and drive to Ndarakwai Ranch.Ndarakwai private Ranch on the Western slopes of Mt Kilimanjaro is a privately owned ranch which is an experiment in its self-sustaining conservation, preserving a variety of habitats that are home to over 65 mammal species, and 350 bird species .
Ndarakwai is part of the Amboseli / Ngasurai Basin eco-system and helps to preserve important seasonal elephant routes.
Many species are permanent residents, while others use Ndarakwai seasonnaly,depening on time of year visited this is the best site for viewing both peaks of Mt Meru and Kilimanjaro at the same time, not to mention the Night games opportunities on the Ranch.

Day 2:Birding,big game viewing and night game drive on the Ranch. With escorted armed rangers we will explore the Ndarakwai Ranch on foot birding and big game viewing. The Mammals on the ranch include: Elephant,Buffalo,Eland,Impala,Baboon,Wildebeast etc while the Bird list is up to 250 bird species on the ranch alone,this include Brown breasted Barbet,Superb Starling,white headed Buffalo weaver,grey backed camaroptera,Namaqua,loughing,African morning and Red eyed Doves,Yellow throated,Chestunut bellied and black faced sangrouse flocking in for a drink.Night at the Ranch.
About Ndarakwai : http://www.ndarakwai.com/

Day 3: After breakfast,we will drive towards Arusha,visiting Arusha National park, Three distinct areas are to be found
within Arusha National Park: Ngurdoto Crater, the Momela Lakes and the rugged Mt. Meru. Ngurdoto Crater is surrounded by forest whilst the crater floor is a swampy area. The Momela Lakes, like many in the Rift Valley, are alkaline, and Mt. Meru is a mixture of lush forests and bare rocks. Within this wide range of habitats almost 400 species

of birds have been recorded in the Park, once in the park,we will be birding and Game viewing the rest of the day and evening return to Arusha.You have the rest of the day exploring the Ngurodoto Crater, the famous Momella Crater Lakes as well as clear views of Mount Meru ( 4500M above sea level ),all Big Game including Herds of Buffaloes, Masai Giraffes ,Black and white colobus monkeys… will be viewed in their natural habitat .The Crater and the surrounding lakes are a habitat to a number of bird species including the lesser and grater flamingoes,maccoa duck,red billed and hotentot teals,little grebes,night herons etcs.Besides the game drive option,we could hire a an armed Game ranger for an escorted walking safari in the park. We willreturn to Arusha at the Ilboru safari lodge for thehttp://www.ilborusafarilodge.com/

Day 4: Visit the lark plains North of Arusha the plains are a home to the endemic Beeslys lark as well as the Athi short toed,short tailed,Pink breasted and fawn colored lark,others include the red capped lark,and other dry country stuff. After the excitement on the plains, we will drive to Tarangire National Park. Tarangire,this park is home to a number of specialty birds such as the The Rufous tailed Weaver and the Ashy Starling which are endemic to Tanzania. Other species include the Barefaced and White bellied go away birds, the yellow collard lovebird – a Tarangire park speciality and the Magpie Shrike as well as the DarNaud`s Barbet, orange bellied parrot, Red necked and Yellow necked Francolins, speckle fronted weaver, grey headed silverbill,beautiful sunbird , The park is excellent for raptors:the Ayres Eagle,African hawk eagle,lesser spotted eagles and African Fish Eagles may be spotted, the river will reward us with a number of water birds including the grey heron, black headed heron, Saddle bill and yellow billed storks…. Common,wood,green andmarsh sandpipers, hermakop,mourning,loughing,ring necked and namaquadoves…Tarangire National park boasts magnificent herds of wildlife and a huge list of woodland and dry country birds too.The Mammal list here include large herds of Elephants and Buffalos as well as a number of plain game and where luck counts we should encounter Leopard, Cheetah and a Lion

pride. The park gets its name from the river that threads its way through the length of the reserve. Night at Tarangire safari lodge or Tarangire Elephant Lodge ( Subject to availability )

Day 6:Morning in the Park and afternoon Drive to Arusha,arriving at the IIBoru safari lodge for the night .

Stretching from the Taita Hills of southern Kenya to the southern highlands of Tanzania, the Eastern Arc Mountain Range has some of the oldest geological activity on the continent. Estimated to be at least 100 million years old – with some formations up to 600 million years old – the relative stability of their climate means that the area hosts a surprising array of biodiversity, from plant and insect life, to spectacular bird species. The Pare Mountains – North and South are
Part of the Eastern Arc range in north-eastern Tanzania, the remote Pare Mountains are extremely rewarding to the avid trekker searching for hiking trails off the beaten path. Home to the Pare tribe, agriculturalists and pastoralists who have largely retained their traditional way of life, a hike through the Pare Mountains takes visitors through local villages and beautiful forests, and offers the chance to see a little-visited part of the country.
The East Usambara range is a steeply scared plateau with the main ridges running north to south. They cover less than 130,000 ha and are one of the smallest ranges in Tanzania. They are separated from the much larger West Usambara Mts. to the north-west by the wide valley of the Lwengera River which flows southwards to join the Pangani River. The mountains themselves are drained internally by the catchment of the Sigi River, entering the sea at Tanga, the principle town in the region. The forests became fragmented long ago. The early German colonists created coffee plantations which have been replaced by an ever expanding tea industry. Some of the better quality lowland forest has been replaced with plantations of teak Tectis grandis. The 19 main forest reserves are in the process of being reorganised into larger blocks with the inclusion of important lowland forest that has survived on public land. The establishment of the Amani Nature Forest Reserve (Hakkinen and Wambura 1992),
gazetted in May 1997 to offer both better protection and public access is to be welcomed, with some reservations that core areas are large enough and access is limited.

Day 8: Morning birding the South Pare mountains area for dry country stuff and out of range species . On the way,we will stop for dry country species such as the Taveta Golden weaver,Black bellied and Hunters sunbirds and other stuff. Night at the Elephant Motel near South Pare mountains.http://www.elephantmotel.com/ After local birding around,we will transfer to the Western side of the Usambara mountains. We hope to get to the West Usambara Mountains in the late evening,the mountains rise up steeply from the surrounding plains and can only be entered from a few roads including the only Tarmac roads dating back in the old German and Eglish Colonial times. From a distance, the mountains are a colorful mosaic. On the fertile slopes around the towns of Soni and Lushoto, farmers cultivate small plots.The view points on the southern and western side of Usambara are well known for the spectacular view of Mkomazi and Handeni plains. Because of its pleasant climate, the mountains were favored by the Germans and the English during Colonial times as is evidenced by the numerous historic buildings from the past.The Mullers Mountain Lodge itself where we stay is an old Residence of the German Chief who lived here during the colonial times.Muller Mountain Lodge is the only upper market accommodation in the area with superb service.You will not forget the grate cookery at this home residence when you leave after a couple of nights here.Bon apetit.

Day 9 & 10: After an early breakfast you will explore some of the forest reminants in the area for the many rare and
endemic species present in this area.The mountains offer a variety of Tanzanian Endemics and rarities to include: the Fullebourns Black Boubou,usamabara weaver,the black Fronted Bush Shrike and the grey Cuckoo Shrike,others include the yellow throated woodland warbler and an endless list of greenbuls to include the tiny Greenbul and the mountain Greenbul,Shelly`s,yellow stripped,Strip chicked… The African Tailor bird ( a new species on record ) will be another bird to look out for here.Much of the Forest in the West Usambaras has been leveled for cultivation so much of the natural forest has been lost,however there are some good spots for birding such as the forest towards the sawmill and another small portion behind the Mullers lodgeDay 11,12 and 13: We will transfer to the Eat Usambara mountains ,birding on the way.spend the day birding the Amani area The morning before breakfast should be well birded around the Malaria center where it is usually easier to see the sunbirds and the Green Headed Oriol.There are a number of green buls too. After breakfast,you may take the Mbomole trails which leads deep into the forest where species such as the White Chested Alethe,Usambara AkalatGreen Barbet,Fischers Turaco and Black backed weaver,Trumpeter Hornbill as well as an array of other forest specialities can be spotted,this morning,we may chance,the Southern banded Snake Eagle,Wallers chestnut sterling,Kenricks sterling,Black bellied glossy sterling,Palm nut Vultures,Cabanis bunting. etcThe after noon will see us visiting tea plantaion where forest reminants and streams may reward us with some more specialities.Evening back to Amani