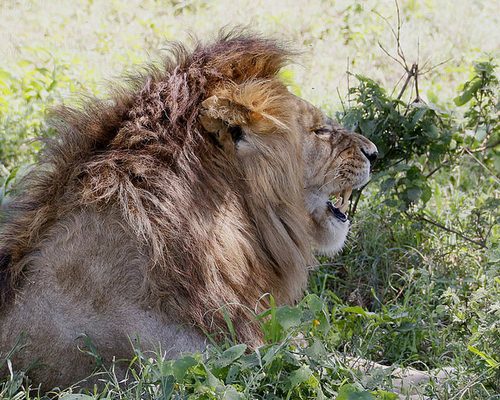 Day 1: Arrival Dar es Salaam International Airport. Meet and transfer to your Hotel. Depending on flight arrivals we may have a chance to visit adjacent Pugu Coastal forest or just spend the rest of the day by the beach where common coastal waders may be encountered. Overnight Beach Comber Resort.

Day 2: Will meet up for a drive to Mikumi National Park. On the way we may have chance to sample a number of bushes where chances may avail the Kurichane Thrush and a number of other southern dry country bird species. We will the arrive at our Luxury Tented Lodge for Lunch. After Lunch we will drive along a local track into the Miombo woodlands where an evening walking may reward us with the rare Pale billed Hornbill, the racket tailed roller and many more Miombo dry woodland species. Evening our Tented Camp for Dinner and Overnight.

Day 3: We will start with an early drive south wards through the Udzungwa mountains down further into the Kilombero flood plains looking out for the Endemic Kilombero Weaver, Kilombero Cisticola and the un named Melodious Cisticola, other specialties here include the Coppery tailed Coucal and Black egret may also be spotted. Depending on how much more time is left, we will return for an afternoon Game viewing in Mikumi National Park. Over night at our Tented Lodge.

Day 4: We will have a sunrise game drive in the park, searching out the big game in Mikumi National park as well as birding, return for breakfast .After breakfast the day scheduled for a flight to Pemba. Depending on request the flight could be scheduled or preferably a private Charter Air Craft from Mikumi to Pemba Island. On arrival we will be met and transferred to Manta Reef Lodge on the North coast. On our way we will have an opportunity to visit Ngezi Forest Reserve that is a habitat for some of the Tanzanian Endemics to include the Pemba Scopes owl, Pemba sunbird, Pemba green Pigeon, Pemba white eye and any other specialties. Over night at the Manta Reef Lodge.

Day 5: This day will depend on how successful the previous evening was in the forest, otherwise we will start an early breakfast and have another opportunity to visit the Forest for any species that might have gone dodgy species. We are scheduled to fly to Tanga this afternoon. Depending on arrangements we can use of the daily scheduled flights between Pemba and Tanga or preferably take a private Charter aircraft to Tanga. Upon arrival at Tanga, we will me met and transferred to Amani Forest Reserve. Dinner and overnight Amani Zigi Informational Guest House.

Day 6: The rest of the day will be spent birding the East Usambara mountains. While in the area we should be able to encounter the rare specialty, near endemic and Endemic birds of the East Usambara mountain forests. This should include the Green headed Oriole, Amani sunbird, Uluguru Violet backed sunbird, Mountain Greenbul, Cabanis bunting, Forest Batis, Usambara akalat, white chested ale, the Usambara eagle owl etc.

Day 7: After breakfast, we will transfer to the extensions of the Usambara Mountains into the Western Usambara mountains arriving in the afternoon at the Muller Lodge. The evening can be spent around the lodge grounds where the Waller’s Chestnut winged starling and a number of other highland species can be seen. Overnight at the Muller Lodge.

Day 8: The half of the morning will be spent birding the different forest trail in search for yet other Usambara Endemics and specialties to include: the Fullebourns Black Boubou, the Usambara weaver, the Grey Cuckoo Shrike, Black Fronted Bush Shrike and the red capped Forest Wabler. In the afternoon we will transfer to the Pare Mountains. The pare mountains are excellent for the Endemic South Pare white eye and many dry country the over-lap the Tsavo park in Kenya and the Mkomazi game Reserve can be spotted here. Over night at the Elephant Motel.

Day 9: Depending on how the previous evening was successful in the area however, we have another chance to explore the area bushes before driving to Arusha. We will arrive Arusha in the late afternoon for Dinner and over night at the Impala hotel.

Day 10: After a leisurely Breakfast at the Hotel, we will be departing for Tarangire national park.T arangire is famous for the Big game, a home to thousands of Elephants, Giraffes and many other mammals. Birdlife in Tarangire is Prolific too. The Endemic Ashy Starling, the rufous tailed weaver, the Yellow colored Lovebird… should all be encountered in the park. Over night at the Sopa lodge.

Day 11: We will spend the entire day Bird watching and Big game viewing in the park. Overnight at the Sopa Lodge.

Day 12: Early morning drive to the Serengeti, which is actually a continuation of the Masai Mara Eco System. You will be welcomed by the famous spectacular wildebeest migration where plenty of wildlife including Lions and other predators are seen taking advantage of the migrating prey. The Serengeti National Park is arguably the best-known wildlife sanctuary in the world. “Serengeti” means “endless plains” in the Masai language, and within its boundaries are more than three million large mammals. About 35 species of plains animals can be seen here including the so called “big five” – elephant, rhino, lion (more than 2,000 of them), Leopard and Buffalo. Most of the plains game congregates in Southern Serengeti, followed by their attendant pred
ators. Other common species found here include hippo, giraffe, eland, impala and other antelope types, baboons, monkeys and a profusion of almost 500 bird species have been recorded on the Serengeti. Overnight at the Sopa lodge.

Day 13: You will then embark on a full day on the Serengeti Plains exploring the entire park and as well searching for the two Endemic birds on the plains which include the Grey Breasted Spur fowl and the Fisher’s Love bird. Overnight at the Sopa Lodge. Looking out over the seemingly endless Serengeti plains, the Serengeti Sopa offers a tranquil oasis set in thousands of square kilometers of National Park. This full service hotel has spacious rooms, all boasting the same fine view as the restaurant, pool and bar area. Each suite, with its own large balcony, has a full en-suite, fridge, air conditioning and comfortable double beds.

Day 14: After an early game drive and all the wildebeest migration excitement, you will then drive out of the Serengeti plains into the famous Ngorongoro Crater. Overnight at the Ngorongoro Sopa Lodge. Listed by UNESCO as a world heritage site, the incomparable Ngorongoro Crater is the world’s largest “caldera”. A caldera is the broad, crater-like basin of a volcano formed by the collapse of the central cone. Dominated by cliffs standing some 600 meters high and presenting a sheer drop down to a wide open space of some 264 square km, the crater is one of the most amazing sights seen anywhere. The Crater is home to 25,000 larger mammals, almost half of them zebra and wildebeest. There are also gazelle, buffalo, eland, hartebeest and wart hog. Such vast numbers attract predators a plenty, mainly lion and hyena but also cheetah and leopard. More than 100 species of birds not found in the Serengeti have been spotted here. Countless flamingos form a pink blanket over the soda lakes. Spread out along the upper most rim of the Ngorongoro Crater the Sopa offers breathtaking views of the crater floor far below. Gazing on the sight below you will be amazed at the wildlife when you actually make your way to the crater floor today or tomorrow – it is like no where else in the world! Each room of the Ngorongoro Sopa offers a fine view – unless the infamous fog shrouds the view in the early morning – with full en-suite, two double beds and one can enjoy the view from the pool, restaurant and bar as well.

Day 15: The entire day will be spent on the Crater floor taking your last wildlife pictures. Overnight at the Ngorongoro Sopa Lodge.