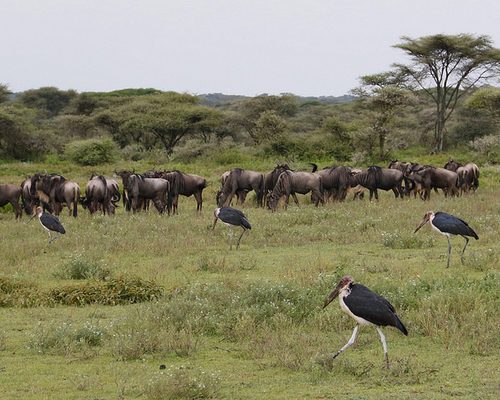 Day 1:  On arrival into Tanzania, you are met by our Tanzania birding driver guide at the airport in Kilimanjaro. You then begin the transfer in a custom built safari vehicle through verdant landscape to the Arusha. Depending on time of arrival, you will have  couple of stops along the way to spot some bird species before heading to the overnight Hotel in Arusha. Following a short birding trip around the property, the birdguide will go through the itinerary one more time on the final briefing prior to the next day’s program.  Birding in the Arusha environs of the hotel introduces: Variable and Scarlet-chested Sunbird, Common Bulbul, Brown-crowned Tchagra, Mourning ,Namaqua Dove, Spotted Eagle-owl, African Black-headed Oriole, Red-headed Weaver, Baglafecht Weaver, White-eared Barbet, Blackcap, Waller’s Starling, African Green Pigeon, Crowned Hornbill.

Day 3: An early Breakfast will be taken, and a picnic Lunch will be carried, getting ready for a long drive to the Serengeti plains. En route you will drive through the Masai country side passed the Rift valley escarpment where you will stop for panoramic views of the spectacular Lake Manyara escarpment, continue through the Agricultural township of Karatu into the Ngorongoro Highlands then to Olduvai gorge where you will un-pack your Lunches while listening to Lectures from a resident Archaeologist at the Olduvai gorge – re discovering the fossils of the early man, you will also have chance to visit the Paleontology Museum where the Australopithecus Bosei skeleton was discovered dating million years ago

Check in at Katikati Tented Camp for Dinner and Overnight.

Day 4: Early rise to catch up with the game as hundreds of Mammals rise out of their dens to begin a typical jungle day,-the Serengeti is famous for her annual Million herds of Wildebeests migrating within the Serengeti –Masai Mara eco –system; Grazers ,Browsers and Carnivores will be seen sharing this great plains in harmony, game viewing and return to the Lodge for your breakfast.

After Breakfast, you will join in for the official Full day game viewing, returning to the Lodge for a hot Lunch. After Lunch you may have the option of either staying in for a nap and go for a late afternoon game viewing once again or relax till next day. Count down your day’s spot list, which may include a handful of Lion Prides, Thomson and Grant Gazelles, Dikdik and other Cats such as the Caracal, Cheetah and Leopard.

Enjoy your Dinner and overnight at Katikati Camp.

Day 5: Morning at Leisure, Breakfast at own pace, depart with picnic Lunches, to have the last of the Serengeti Plains- taking the last pictures of the Serengeti with chances of catching up with the Kilpspringers and other Antelope species such as Topi, Eland, Water bucks. Enroute to Ngorongoro are Maasai local home stead (locally known as the Maasai Boma, the Maasai will welcome you to visit their home for a “fee”) Rest of the evening relaxing at the Ngorongoro Sopa Lodge balcony with taking views of the crater floor.

Day 6: After the 7:30Am Breakfast, you will descend the crater walls onto the crater floor which has a radius of about 265sqKm. The Crater is uniquely dotted with watering holes and shelters about 30,000 Mammals including the White bearded Gnus, Cheetah and Tanzania’s only Black Rhinos.” This is the eighth wonder of the world and the world’s only remaining memories of the “garden of Eden” better described as Noah’s Ark.. After the excitement at the Crater floor, you will ascend the Crater walls to your Lodge. Birds to look out for this day include; Cape Rook, Kestrel, Chestnut-bellied Sandgrouse, Yellow-throated Sandgrouse, Rufous-crowned Roller, White-throated Bee-eater,  Singing Cisticola, Wailing Cisticola, Yellow Bishop, Schalow’s Wheatear, Northern Anteater-Chat, Yellow-fronted canary, Steppe Buzzard, Abdim’s Stork, Rueppell’s Robin-chat, Spur-winged Goose, Saddle-billed Stork, Mountain Yellow Warbler, Hunter’s Cisticola, Eastern Mountain Greenbul, Streaky Seedeater, Cape Robin-chat, Kenrick’s Starling,OlivePigeon, Schalow’s Turaco, Tropical Boubou, Dusky flycatcher, White-eyed Slaty-Flycatcher, Cinnamon-chested Bee-eater. Night at Country Lodge.

You will then take your picnic Lunch at one of the many Picnic sites set aside by the park Authorities and then continue exploring the Lake Manyara jungles, where a good list of wildlife will be added to your previous record. Drive out of the park boundaries in the evening into E Unoto Retreat Tanzania’s only true 5 Star Luxury Lodge set in a remote Maasai Country where bird walks can be arranged.

You can then later join in a walk exploring the local surroundings where again you will have further chances of birding for waders and a mix of dry country species as well as meeting up with the local people. Later, dinner and overnight at your Lodge.

Day 9: Leisurely Breakfast, Lunch at the Lodge and drive to Arusha to catch a PM flight home or transfer to Nairobi.