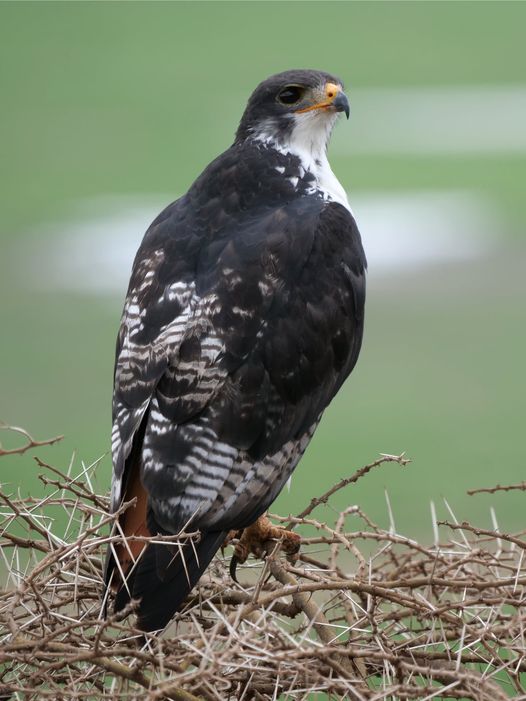 The joy of birding is best shared, and so, this week, the bird we are following is the Augur Buzzard.

The Augur Buzzard is a fairly common bird that is nomadic in response to the supply of available prey.

They are commonly found on rocky outcrops in the mountainous country as well as in woodlands and arid scrub.

The population is found intermittently from Ethiopia and East Sudan through Eastern and Central Africa to Zimbabwe. There is some isolated population in South West Angola and Namibia. In Southern Africa, the species is confined to Central and North Western Namibia, Zimbabwe and adjacent Mozambique. There are vagrants at Tsodilo Hills, North Western Botswana.

They are resident, with some juvenile dispersal; and occasional nomadism linked to prey availability.

The general habits of the Augur Buzzard can be described as living solitary or in pairs. They have a longevity of about 9 years. They spend most of the day perched (58%), with the remaining time split between soaring (29%) or hovering (13%). Towards midday, the buzzard rests perched in shaded areas in the trees or will soar much higher than at other times. The Augur Buzzard is known as territorial but will range most widely in the non-breeding season.

The call of the bird can be described as a harsh kow-kow-kow, sometimes led by a whistling note made mainly in display, but also in greeting, or when soliciting food, or alarmed. The young bird calls with a penetrating pi-pi-pi-pee-ooo-ooo, or cheeu-cheeu, occasionally interspersed with tuk, tuk notes.

The adult male can be described as having a blackish slate crown, face and upper parts, along with whitish streaks, especially on frons, supraorbital ridge, mantle and scapulars.

The underwing coverts are a white, with greater primary coverts mostly presenting with blackish tips forming a dark comma. Undersides of the flight feathers are mainly white, with broad blackish trailing edge and fine dark grey barring on secondaries and inner primaries.

The underparts are white, with throat and sides of breast sometimes presenting with dark streaks; along with undertail coverts rufous. Some males retain a narrow, dusky grey-brown juvenile subterminal undertail band. Its bill is black, cere yellow, and eyes are dark brown. The legs and feet are yellow.

The female is much like the male, but the throat and breast usually have more extensive blackish streaking, often forming a distinct bib.

By one year, the underparts are mainly creamy white, with blackish spots on flanks, thighs and underwing coverts. The immature bird moults into adult plumage over the 1.5 year period after this, with mosaic of adult and juvenile plumage visible during this time.

Flight feathers present as grey-brown (with darker brown bars), forming a slightly paler panel visible in flight and at rest. Underwing coverts are buffy, with dark carpal patches and dark tips to flight feathers that are more diffused than adults.

The underparts are buff with irregular brown blotches on the throat, flanks and thighs. Undertail shows as a greyish brown, with narrow dark brown bars and broader subterminal band with the tail being distinctly longer than the adult.

The Augur buzzard likes to hunt from a perch with a downward swoop to catch its prey. It will also hunt from the air in a rapid parachute drop with its feet extended in front of it to catch mostly reptiles. It feeds on insects, nestlings, rodents and reptiles, and will sometimes chase prey on the ground.

All our Tanzania Tours guarantee an Augur Buzzard!

If you want to see one of these beautiful feathered friends and find out why they are so popular, you can enquire or book with us at www.tanzaniabirding.com.

How to choose the perfect birding tour for you
The Red-billed Firefinch - for a more vibrant birding experience
Share this: