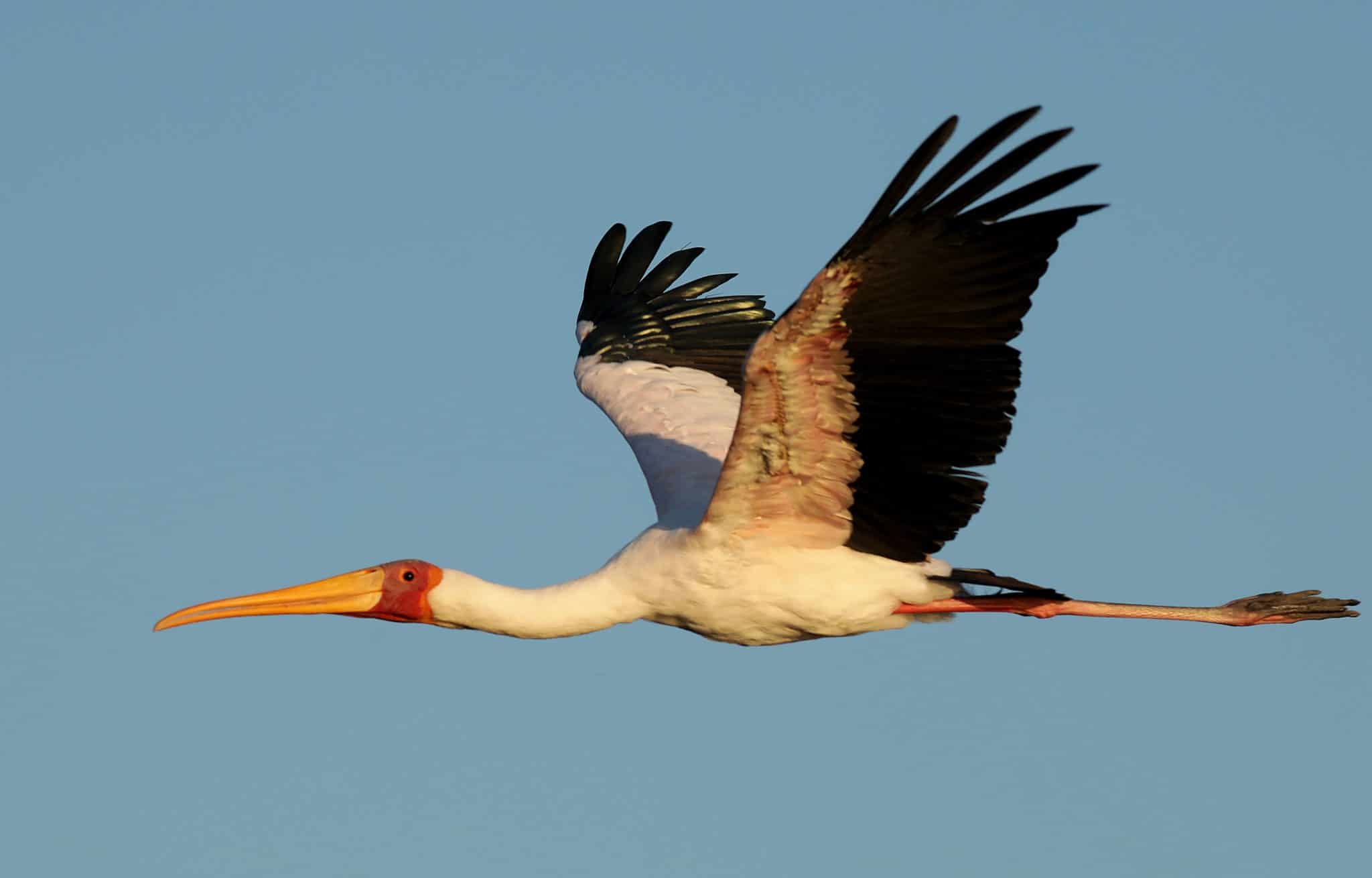 Seeing a Yellow-billed Stork (Latin name – Mycteria Ibis) is an unusual experience. They are not small birds, which makes for an interesting sighting. The Yellow-billed Stork is a large wading bird in the stork family – Ciconiidae, but although one may expect them to be ungainly, they have extremely quick reflexes.

The male and female are the same when it comes to plumage and colours:

The Yellow-billed Stork is a stealthy bird, moving slowly and quietly on its long legs.

Storks will generally travel in flocks. During the breeding season, the storks make a hissing sound and adults may make a hollow banging sound with their bills. The babies will beg for food with a braying sound.

The Yellow-billed Stork feeds on the ground and in or around water mainly. Their diet consists of mostly:

When hunting, they stand on one leg and use the other leg to muddy up the water and get the prey to move from their hiding places. Once the prey is moving, the stork is able to dunk its head into the water and catch the prey with its lightning-quick reflexes.

Habitat and flocking behaviour for this bird

The preferred habitats for Yellow-billed Storks are wetlands and riverine areas.

They breed when food is abundant. The breeding cycle often takes place toward the end of rainy season, or in a dry season, depending on food availability, or when fish and frogs are more easily caught in shallow pools.

When mating, the female stork approaches the male. The male stork selects the nesting spot and together the male and female build a nest of sticks and debris. Most often the nests are built in a tree, away from predators. It can take the pair several days to build the nest. The Yellow-billed Stork is monogamous unless its mate dies. In the event of a partner dying, the stork will seek out a new mate

Once the female has laid her eggs (normally 2-3 eggs), the incubation period is about 30 days long. The eggs are laid on alternate days, so they also hatch accordingly. The babies remain in the nest for up to 55 days when the fledging period begins. The stork comes of breeding age at around 3 years old. The lifespan of a stork is about 19 years in captivity.

Unusual Facts about this stork

If you want to see one of these large, feathered friends and find out why they are so popular, you can enquire or book with us at www.tanzaniabirding.com.

Tips for when you book your birding tour air ticket
How to choose the perfect birding tour for you
Share this: