Diedericks Cuckoo – the bird whose call is it’s name 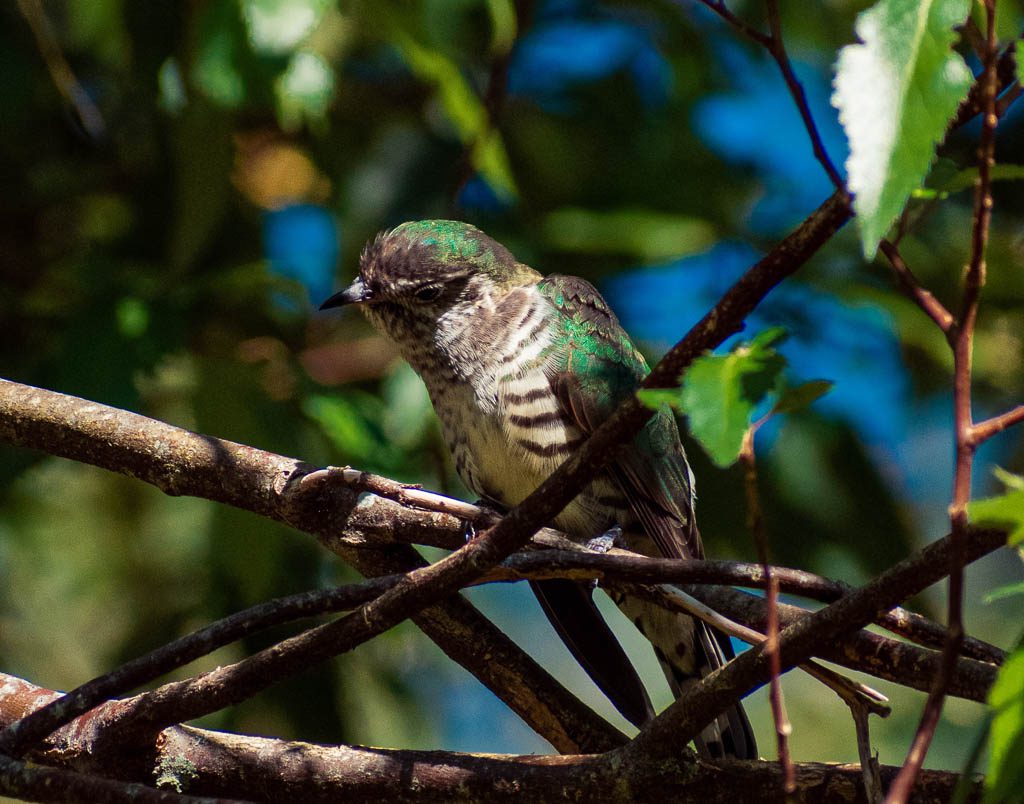 The Diedericks Cuckoo has a very distinctive call, which just so happens to sound much like its name. It is known for its plaintive high-pitched fluty whistles, dee-dee-deederik, rising and falling in pitch, repeated at regular intervals.

The Cuckoo is 18-20 cm in size. The sexes are dimorphic in plumage coloration with the female being slightly larger than the male.

The adult male’s bill is black, eyes and eye ring red, with grey legs and feet.

The male’s head and along its back is metallic green, with bronze patches on the back of head and nape. The Supercilium forehead and median crown are striped white. Its tail is dark green; with the exception of the central pair of rectrices with white tips and white spots along both edges. The upper wing coverts are a glossy bronze-green, with large white spots. The flight feathers are blackish, with white bars across inner webs of primaries. Underwing coverts and undersides of the flight feathers are dark with white bars with the underparts being white and flanks, thighs and undertail coverts barred green.

The adult female’s bill is black with hazel to reddish brown eyes and a brown eye ring.

The female is similar to the male, but duller, with or without white forehead. The upper parts are green, rufous or intermediate, but usually rufous or bronze.  The upper wing coverts with white to buff or rufous spots. The female has a dark green tail, rectrices with rufous spots and notches; and second to fourth pairs with broad rufous bars. The underparts are white to buff with the throat and breast usually washed brown. The breast is often lightly streaked or barred dull green or bronze.

In the juvenile, the sexes are alike. The upper parts are dull green, bright rufous or intermediate, with green and rufous barring; some with rufous restricted to the crown. The upper wing coverts with pale spots (except in rufous birds) and the underparts are white; with the throat being dark greenish or rufous streaks. The breast and belly are blackish with dark green spots. The bill is coral red, and grey to brown eyes. While still in juvenile plumage, the eye ring of the male will become red, and the legs and feet dark brown.

The cuckoo searches through the foliage while moving from perch to perch, or searches from perch and flies out and takes prey from the ground or from tree stem. It will also glean prey from leaves and stems, and hunt like hover-hawks.

Mainly caterpillars are eaten, including the Chestnut Eggarlet Anadiasa punctifascia (which occur in a protective woolly cluster), Barred Eggarlet Bombycomorpha bifasciata, Mopane Emperor Moth Imbrasia belina, and the distasteful Acraea spp. It will also feed on termites, including alates, grasshoppers and adult butterflies. Caterpillars are grasped near the head and eviscerated by shaking. The juvenile cuckoo skins caterpillars by holding it at one end, flicking it until the skin separates from the body, then shaking to remove the skin. Hosts’ eggs are sometimes eaten.

The Diedericks Cuckoo is located in Sub-Saharan Africa and the southern Arabian Peninsula. It is widespread in South Africa but largely absent from the Namib Desert and central and northwest Karoo.

The Diedericks Cuckoo is found solitary or in pairs. They are conspicuous in the breeding season; with males calling for extended periods from prominent perches. The females are less conspicuous but often seen in interactions with males. The female will be found sitting for long periods concealed in foliage close to breeding colonies of host nests. Their flight is direct with rapid wingbeats.

After sighting a female in his territory, a male Diederik Cuckoo courts her with song and hairy caterpillars. After mating, she will leave him and lay a single egg in an alien nest. She then flies off leaving the “foster” parents to hatch and raise her offspring. If she enters a nest when the host is absent she will remove a host’s egg from the nest. She will fly up to 100 m away, perch and eat the egg, or discards or drops the egg at or near the nest. The female may lay as many as 20 to 24 eggs in as many different nests during the breeding season.

The Diedericks Cuckoo is not threatened and has most likely expanded its range.

If you want a chance to see a Diedericks Cuckoo on a birding tour, contact us and find out how you can book one of our tours at www.tanzaniabirding.com.

The quirky bird with a smaller red horn - Tanzanian Red-Billed Hornbill
Can you see the Spotted Thick-knee on our birding tours?
Share this: